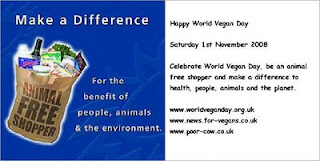 Visit www.flickr.com/groups/worldveganday choose a picture, add a picture and use delivr to send a personalised bespoke World Vegan Day E greeting card and inspire all your friends.
Posted by Vegan Chef at 12:23 PM 1 comment:

Oasis Natural Products will be giving away 64 vegan food parcels - One for every year of veganism since 1944.
Free tasters and prizes available too.
96 High Street, Croydon CR0 1ND www.oasisnaturalproducts.co.uk

Foods for Life are Challenging Pizza restaurants to create a healthier vegan version of this most unhealthy fast food.
They have a devised a recipe with 64 healthy ingredients - one ingredient for every year of veganism. See Healthy Vegan Pizza
www.optimumnutritionists.com - www.news.foodsforlife.org

World Vegan Day - Glasgow - will you still feed me when I'm 64
The Underpendent collective of vegan restaurants in Glasgow (mono, Stereo, the 78) will be offering a World Vegan Day Tripper I've Got A Ticket To Ride meal ticket
Vegan breakfast , Lunch and Dinner all for only £10 on World Vegan Day 1st November.
See Vegan Cafes Glasgow - World Vegan day Glasgow

World Vegan Month - UK Off the Hoof - Magazine Launch
A new vegan magazine is being launched for World Vegan day. Called 'off the hoof' it is an irreverent look at life through vegan eyes. Recipes, product reviews, travel, celebrity interviews - it sounds normal but it's anything but.- See Ethical Pulse

Vegans will be celebrating their 64th Birthday at the West Midlands Vegan Festival in Wolverhampton.

A US Survey of 3,200 adults (May 2008) suggests "The vegetarian and vegan market has the potential to grow to nearly six times its current size, which would bring the total number of such consumers to almost 18 million adults."

They have posted a recipe for a healthy Pizza with 64 ingredients to mark the Vegan Society's 64th Birthday on November the 1st.

How can you help?

Contact High Street Pizza Restaurants to ask them to provide a Healthy Vegan Pizza choice on their menus.

www.stopwar.org.uk reveals "The cost of the Iraq war to Britain is estimated to be as much as £10 billion, and the US government spends $10 billion dollars a month on the conflict.

But the cost is substantially more when hidden costs are taken into account. Who pays for after care for injured soldiers? Pensions and injury payments?

Joseph Stiglitz, leading economist and former head of the World Bank, has estimated that the total cost of the war to the US will be $3 trillion and $6 trillion to the world."

Perhaps Sir Bob Geldof should re record his song "I don't like (black?) Mondays" ? - The catalyst for todays Wall Street crash was the growing realization that the Bush administration's $700 billion rescue plan and steps taken by other governments won't work.

I'm not suggesting that the war in Iraq has bancrupted America and potentially all it's allies, I'm sure there are many other factors of Mr Bush's administration that have led to such a financial mess. I mean there's a war in Afghanistan too. The main war has been on the taxpayer a war waged by Bank executives who dished out billions of dollars of bonuses even though they had failed in their jobs and their responsibilities to shareholders.

A society that rewards greed and failure simultaneously has only itself to blame......
Posted by Vegan Chef at 10:22 PM No comments: 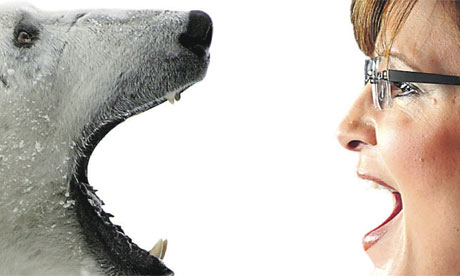 Sarah Palin v the polar bear: who will survive? | World news | The Guardian: "the right to arm bears" Ha ha ha - Well done Tim Dowling for this (and Jasmijn de Boo from Animals Count for spotting it)- loved this article!

Surely the US voters are not mad enough to let this gung ho Rambo meets Nania's Ice Queen from The Lion , The Witch and the Wardrobe into the whitehouse??

Sure democracy dictates that the Oil Industry needs it's voice but look what happened when they let George Bush into the Whitehouse - Wars, skyrocketing oil prices, environmental and economic devastation, edpidemic of preventable chronic disease, a plague of GM Soya throughout South America....... Pirates in the Ivory Coast.
Posted by Vegan Chef at 9:49 AM No comments: