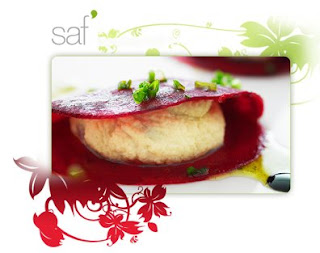 At last! After nearly 30 years of waiting the restaurant of my vegetarian / vegan dreams has finally arrived in London. Saf means pure in Turkish and it truly is pure - pure magic. A personification of epicurean delight. A magical mystery tour into textures, flavours, visual artistry and culinary enlightenment.

My 4 course dinner at Saf was divine. I'm humbled, time for me to retire from messing about about in the kitchen and leave it to the new young blood, a chap called Chad.

Flavours, presentation, ambiance, service, and energy of the whole experience was exquisitely luscious and sumptuous.

Admittedly they had only just opened and were full of that initial earnest passion to please and not too busy to treat everyone like a celebrity but there was nothing I could fault them on - they'd thought of everything. I don't think it will be long before it's full of ingonito hollywood socialites, celebrity anglophiles and the cream of British arthouse bohemia. Saf's Joe McCanta, sommelier/mixologist/jazz pianist (ex counter New York) and Chad , gourmet chef, already have a fanbase in New York and next time Moby comes to London I can't think why he'd eat anywhere else other than saf.

This is just one of many examples of where supermarkets are getting it wrong on vegetarian and vegan labelling. Look for the official Vegetarian Society or Vegan Society Logo on products to have reassurance that there are manufacturing procedures in place to stop cross contamination and the vegetarian and vegan ingredients sources have been thoroughly checked.

The prosecution followed an investigation by Northamptonshire County Council’s trading standards team after a complaint was made by a local man who purchased two tins of Morrisons own brand ‘Meat Free Ravioli in Tomato Sauce - suitable for vegetarians’ from a store in Northampton. The complainant had been a vegetarian for 23 years and was ‘unimpressed, disgusted and disappointed’ to find meat in the product.


The ravioli product had been manufactured and packed in Italy and during the investigation it became clear that Morrisons had received several other consumer complaints of the same nature in the previous two months and had failed to investigate them properly.

Cabinet member for community safety Councillor Liz Tavener said: “Food labels are there so that consumers can get the information they need to know before they buy. This is important not just for health reasons, but also for people who follow specific diets or have food allergies.

“In this case, someone who was vegetarian unwittingly purchased a product that contained meat; this falls well below the standards that consumers can expect and would not have happened if appropriate action had been taken by the supermarket following earlier complaints from other customers. Thanks to trading standards, the product has now been withdrawn from Morrisons supermarkets.

For help with legitimising your products with an independent, well recognised and internationally respected accreditation please contact MiV The Ministry of International Veganism.
Posted by Vegan Chef at 11:57 AM No comments:

Vegetarian Animal Rights party Animals Count are campaigning hard for a seat on the London Assembly.Their sister party in Holland already have elected members but the UK have some catching up to do.

Jasmine de Boo, 32, is the first person to stand in a UK election for the Animals Count party and hopes to pick up votes from disillusioned animal lovers.

The Dutch national, who lives in Kennington, south London, stood in the European elections for Holland's Party for Animals.

Ms de Boo, who works for an animal welfare charity, came to the UK shortly afterwards and founded Animal Counts, which she says has more than 100 members - mostly in London and Wales.

She hopes to pick up votes from Londoners who are "disappointed and disillusioned" with the main parties and says it is "possible" to pick up 5% of the vote - enough to secure the deposit.
Posted by Vegan Chef at 9:42 PM 1 comment:

Queen Rania of Jordan launches a plea for understanding and tolerance.

Vegans and vegetarians should be able to relate to problems caused by stereotypes and being shoved in a box. Sadly some vegetarians and vegans don't use that learning to extend the lesson of a need for tolerance and understanding and pass it on. Maybe it's about time we did. The roots of vegetarian and vegan philosphy are based in this concept of goodwill to all (including animals) and humanitarianism are the bedrock of the movement. A little more learning, a little more understanding or overstanding to quote Benjamin Zephaniah won't hurt anyone.
Posted by Vegan Chef at 10:18 AM 2 comments:

So we now have the world's first laboratory grown meat for sale online. No animal suffering as no brain involved but is it vegetarian? Well nothing has been killed so by the definitions of the UK Vegetarian Society I guess the answer is "Yes!"

Whether it will ever be awarded the Vegetarian Seedling symbol logo is another matter.

But is it vegan? The Vegan Society guidance is to avoid all animal products and humans are from within the animal kingdom rather than the plant kingdom so probably technically no.

There are exceptions - The official Vegan society answer to the age old question "is it OK to swallow as a vegan" is "if you want to" although it's generally accepted that the donor should be vegan too as much for taste purposes as anything else. Bodily fluids such as breast milk are considered completely natural and vegan providing there's no exploitation involved. So thus human milk for a mother's baby, yes - camembert cheese made from human milk milked from a poorly paid chinese mothers sitting in a factory connected to pumps probably wouldn't get passed the Vegan Society council.

Our guidance ? Forget it ! The whole idea is Yucky! There are so many vegan alternatives to meat out there - this year at The Bristol Vegan Fayre on 1st June there will not just be the usual burgers but a 10kg Vegan Hog Roast being BBQ'd to celebrate National Vegetarian Week and National BBQ Week.
Posted by Vegan Chef at 11:21 AM 2 comments: