Marmite Ban - Too many vitamins?: Backlash!

Following the Ban on Marmite in Denmark (Guardian Tues 24 May) there has been a backlash against the Danish Authorities who apparently banned it for having too many vitamins!

There is even now a call for Marmite Lovers to retaliate by boycotting Danish Bacon (hurray!) and Lego!

The Danish Authorities are now claiming that they haven't 'banned' it just used the legislation to get marmite removed from shop shelves in Denmark.

Vegan Pirates of the Carob Bean are calling not only a boycott of Danish products but a symbolic burning of Danish Bacon, Lurpak Butter and Havarti Cheese at Bristol Vegfest this weekend

Why the French think IMF's Strauss-Kahn was framed: 4 theories - The Week 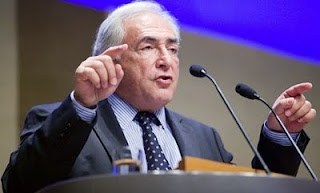 Why the French think IMF's Strauss-Kahn was framed: 4 theories - The Week: "Dominique Strauss-Kahn"

Of courseDominique Strauss-Kahn was framed . He was getting up the noses of the banks , and thus their employees the government, by calling for more regulation and undermining US banking power by negotiating with China and Russia and threatening to stop the US from doing what the feck they like.

Wakey wakey! This is the banks who bankrupt countries - "whoops we got caught out again!" , they gamble with our money, they lose our money, get bailed out with more of our money, charge us interest on the money we gave them to bail them out, reward themselves with big bonuses for getting away with it, paid by us, then tell us because we have borrowed so much money to bail them out we should tighten our belts and reduce our standard of living because they are not prepared to and someone has to.

No wonder they feel they are above the law, they get away with outrageousness every day, they rarely even pay any taxes having registered themselves in Switzerland to avoid it. It's not like murder, they are just destroying someone's career.

Here's the theory
Dominique Strauss Kahn, charged with an endless array of sexual crimes, rape, multiple sodomy charges is most likely the victim of one of the most obvious ploys known to man called the “honey trap.” Why was he a target of intelligence operations? The answer is both simple and complex.
Kahn, unknown to most until this week, has been on a crusade to end the financial crimes that are impoverishing, not only the 3rd world, but destroying the standard of living for Americans and Europeans as well. His most recent solution, the use of SDR (Special Drawing Right) bonds would be a step toward a global currency. However, the probable direct cause of his arrest is the fact that SDR bonds can’t be traded on the secondary market or used in wild collaterilization programs such as the Bush era “Ponzi schemes” that allowed Wall Street to create unauthorized money by creating imaginary debt.

That Kahn’s primary backers are Russia and China put a target on his back. China could continue its undervalued currency but hide its massive reserves of foreign currency with the IMF rather than lending it to the US treasury. Kahn had become dangerous.

Much of the $14 trillion in US debt is money Americans have borrowed to replace losses by Wall Street of money that never existed in the first place. You can’t make stuff like this up, unless, of course, you are a Wall Street power elite.

Kahn’s program, which has enjoyed a a generally chilly reception over the past few years, has, with the impending collapse of the US dollar, been gaining momentum, and with this, Khan has become a veritable financial “bin Laden.” In a sense, taking down Kahn is a far bigger victory than the killing, real or imagined, of Osama bin Laden.

"Human society is not a force of nature. The financial crisis was a catastrophic event, but one created by human hand. The lesson we all need to learn is that even a free market economy needs some regulation, otherwise it cannot function. All these ideas about deregulation -- that more deregulation is always better and that the market can solve every problem -- are fine on paper but they do not work in reality. "

Think about it, I don't stay in $3,000 dollar a night hotels but even in the cheap ones I do, if the chambermaid knocks and doesn't get an answer and comes in, the chambermaid says "whoops", apologises and scarpers she doesn't hang about for an eyeful of 60 year old VIP bollocks and a celebrity photo. One of the priveledges of paying $3,000 a night is your privacy is respected, paparazzi are kept off your back, you can ask for a blow job or a line of coke and get one without the press finding out whether you are Russell Brand, Justin Beiber or the  MD of the freakin IMF, even if you are 60 - that's the point of $3,000 a night surely,  you get whatever the hell you want, any time of day and it's added to your bill as room service - ask any doorman.

or ice cream, or chocolate, or cakes
Posted by Vegan Chef at 12:02 PM No comments:

Apparently Glastonbury are organising a bullfight with a champion Portugese bullfighter

With all due respect surely Bullfighting, even with a plastic bull flies in the face of the spirit of Glastonbury - greener, kinder world

Would you get an American soldier from Iraq / Cuba to demonstrate on a plastic doll how he tortured and killed a muslim soldier?

How about inviting executors from various Muslim / African Countries to demonstrate on plastic dolls how they carry out the death penalty on homosexuals?

Will there be paintballing this year too? Pretend to kill your neighbour?

Perhaps a mock Fox hunt where the hunt tramples over everyone's tents and the dogs tear apart a toy plastic fox stuffed with pasta in a rich sundried tomato and grilled red pepper sauce????

No animals are actually hurt so where's the harm? - Doh!
Posted by Vegan Chef at 3:03 PM No comments: