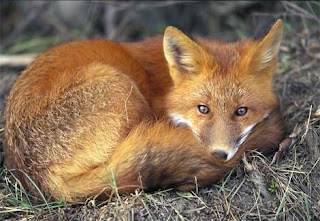 With condolences and all due respect to the family whose babies were scratched and bitten by a fox, the timing of the recent story about foxes story seems far too suspicious to be ignored to me.

Barely a few weeks after the Conservatives (who's manifesto included the pledge to bring back foxhunting) get into power, we get a story splashed across ALL the UK newspapers about the dastardly foxes straight out of the children's books - boo, hiss, nasty, evil, cunning, deceitful Mr Fox. The call for blood letting starts immediately with a host of Tory MPs, Mayor Boris Johnson and the Tory press calling for a urban fox cull.

Isn't anyone just a little bit suspicious how this cunning clever ginger canine could be sooo stupid as to play right into Tory fear mongering and murdering hands.

We have families of foxes every year in our garden, yes they sometimes make a racket but now we have double glazing we rarely hear them. Has our cat ever been bothered by them? no! She doesn't seem to be the least bit phased by their presence when she faces them in the street. There are however a number of cats down our street that make her run for cover even when we are about to protect her.

Would I trust a fox with my baby, hell no, I'm not stupid , although more than I would trust leaving a baby outside a supermarket unattended with dangerous humans all around. ( 500 Child abductions PA , 7% children physically abused by parents / carers and over 11% of kids sexually abused , in 2009 over 34,000 children were registered as at risk and on Child Protection Plans )

Our cat has a magnetic key to open her cat flap (actually to stop the Toms following her in but it works for foxes too. Even before the magnetic flap in 10 years we only ever had one fox venture into the kitchen and the poor thing was petrified.

Logically we should be more afraid of dogs than foxes, foxes are much more likely to fully aware of whose at the top of the food chain, carries guns or has a pal with lots of horses and a pack of hounds gagging to rip a slow fox apart limb from limb.
Dog Attacks

The whole fox thing is a complete Tory red herring to take your mind and attention of cuts in education and the health service. Don't fall for Boris Johnson's Testicular Tory Tirades.
The fox is an opportunist but their are far more dangerous opportunists than foxes out there, every town has them, Westminster is full of them but the have two legs not four.
Posted by Vegan Chef at 1:32 AM 1 comment: Links to this post 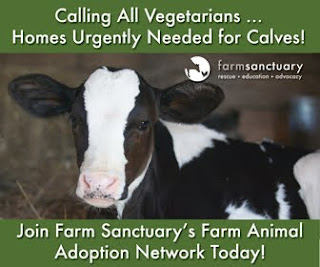 Got room for a Cow?

That's the trouble with the dairy industry - just like in the egg industry the males of the species are just "waste product" - Male chicks get gassed or crushed alive and then chopped up the egg producers just need the females to lay eggs but nature maintains a balance of males to females so they are just garbage.

It's the same with Dairy farmers - the quandary 'what do we do with the male calves - the boys don't make milk - they are useless. These 6 calves were found chucked in a shed left to die, Farm Sanctuary saved them.

If you know someone with a big lawn to mow and needs tons of manure please give Farm sanctuary a call
Posted by Vegan Chef at 4:53 PM 1 comment: Links to this post

Now that's what I call a World Cup game a quality Football match. Who'd have thought a Vegan would have won the Socceraid celebrity game of charity football for Unicef that Robbie Williams championed. There was so much traffic on the official Unicef Socceraid website that they shut it down for the weekend. Twitter has gone mad with it and Woody Harrelson or 'harellson' and 'harellson' was trending on twitter for a while there even ahead of #howtogetslapped ??!??!? Some fans had assumed he'd died - why else would Woody be trending on twitter?

This is probably the last ever blog on football so if you've stumbled across this please also check out Spirit Of The Game - a film about Sir Stanley Matthews
Posted by Vegan Chef at 11:16 PM No comments: Links to this post