The new stars of healthy Vegetarian and Vegan catering, Redwood Wholefoods, have won yet another Healthy eating Award to add to their impressive list of achievements. The Foods For Life Nutritious and Delicious Award 2006.

Redwood's Food products are loved by everyone not just those on vegetarian and vegan diets. Redwood Foods Award winning products now include:

Redwood Cheezly - The world's first melting dairy free vegan cheese - fantastic on Pizza or on Toast. Declared "heaven on toast" by a spokesperson from the Vegetarian Society

The Redwood food policy of making products suitable for everyone and incredibly delicious aswell as nutritious means they are increasingly becoming the No 1 choice for retailers and caterers alike.

See the
Redwood Foods Website at
www.redwoodfoods.co.ukor meet them in person at The Bristol Vegan Fayre or The London Vegan Festival

Vegan BBQ Is Not a Mission Impossible With Vegan Mayo

Plamil have launched a “It’s not mission impossible” bbq website in conjunction with London Nutritionists Foods For Life to celebrate the 10th National BBQ Week and summer celebrations in a healthier way.

Vegan BBQ
Posted by Vegan Chef at 2:31 AM No comments:

The market for foods replacing meat and other animal products is estimated at $2.8 billion, according to Mintel International Group Ltd., a research consumer company.
Posted by Vegan Chef at 11:49 PM No comments:

"Many millions more will be spared an early death or a life of pain because of the research now under way. They deserve our support. And they should get it."

Meanwhile innocent campaign administrators have been arrested and sent to jail despite no evidence that they have actually done anything apart from run a successful campaign and print leaflets, send emails and run websites.

Blair talks about keeping shareholders and company directors names a secret - is this guy masonic or demonic?

Little wonder Labour did so badly in the local elections - they've well and truly lost the bunny vote.

It seems he is intent on being big pharma's puppet in protecting their illegal activities and disgusting inhumane torture. He has no excuse - he has been shown undercover evidence of what goes on and HLS's illegal activities but obviously the hand up his backside is too big to allow him to stop licking these criminal's bottoms.

For the truth see

What Doctors Don't Tell you

Da Vegan Code - Symbols all around us 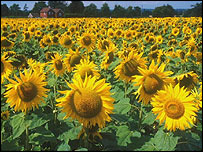 Da Vegan Code - Da Vinci symbols are all around us

Da Vegan code is all around us, some just choose not to see. Chosen for it's perfect opposing spirals in a perfect Golden ratio of Phi 1.618 in the Fibonacci sequence, the Da Vegan Code sunflower symbol is all around us.
Posted by Vegan Chef at 11:45 AM No comments: