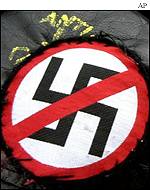 Obviously some traditions are still alive and flourishing in the Austrian administration system and hard to shake.

Alliance for the Future of_Austria

Although I have second thoughts even as a vegan author let alone Turkish, Jewish or Homosexual leanings having just read about Austrian Politics and neo nazi popularity.
Posted by Vegan Chef at 3:50 PM 4 comments:

Just goes to show if it's not vegan it's not cruelty free.

Once again the farcical RSPCA Freedom Foods scheme has been exposed for not policing it's licensees and ensuring actual farm conditions live up to public expectations. The RSPCA need to take a leaf out of the Soil Association's book and make enforcement , infringement and trade descriptions abuse something to be feared rather than scoffed at.

The RSPCA are sitting back and nonchalantly allowing the whole scheme to fall into disrepute by failing to ensure animals do actually recieve the 5 freedoms they publicise.

You wouldn't think these could be so open to commercial interpretation and abused so dramatically but they frequently are. Normal behaviour for instance is interpreted by some farms as normal behaviour for a claustrophobic, caged hen with obscessive dementia and depression.

Despite numerous previous exposees by organisations such as The Hillside Animal sanctuary in Norfolk this is the first time that the RSPCA have finally agreed to launch a long overdue full and 'thorough' review of their Freedom Foods scheme.

All talk or more hollow promises to keep the millions of ££££s rolling in from the public ? We'll have to wait and see. At least this one farm has now been thrown out of the scheme and supermarkets may be prompted to carry out their own spot check quality control investigations to avoid loosing faith with their customers along with the RSPCA.

Restaurants make it very difficult to find out what's actually in their food. Sometimes we only find out through court action as with KFC and Mcdonalds and using secret ingredients such as extract of chicken and beef fat in chips and flavourings.

Enforced honesty about a whole days portion of saturated animal fat in just one dish would encourage more healthy plant based dishes on the menus.

We like to kick start a campaign for a Healthy (vegan) Pizza on the High Streets for World Vegan Day - contact us if you are interested in helping with this.
Posted by Vegan Chef at 10:59 AM 1 comment: