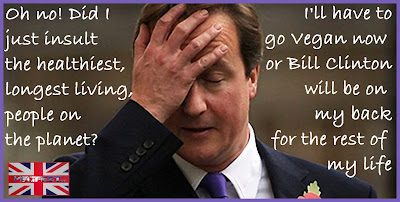 UK Prime Minister David Cameron joked as he informed the House that "a shopkeeper in Enniskillen had been disappointed at the dearth of G8 protestors, as he’d stocked up specially on vegan meals. Now there's lots of vegan food going spare". (what? vegetables?)

Might have got away with that had he not followed it with "All the leaders in the G8 had signed an agreement declaring that they would never pay ransoms to terrorists."

Wonder what Bill Clinton will say about the inference that vegans are terrorists.
Posted by Vegan Chef at 3:20 PM No comments:

Time Magazine reports research and studies in JAMA Internal Medicine Journal that explain why Vegetarians and Vegans are healthier than those people that eat meat.

In their desperate attempts to find the compounds in meat that are killing millions of Americans and British people every year scientists have found that it's not just the saturated animal fat that is the problem.

It seems there are a host of microbes and chemicals in meat designed to attack the fabric of human existence.Your body can cope them for a while but it seems to explain why American Footballers and cavemen don't live that long - if you want to duck out of old age and dodge getting lumbered with the grand children then eat lots of meat.

If on the other hand you want to live long and prosper then eat your vegetables. That's the thing that's always confounded the researchers before. People who eat less meat tend to eat more vegetables. It's true that eating more vegetables has a protective effect but now scientists can seperate factors like smoking, drinking alcohol, exercise, type of meat, dairy, vegetable consumption, and account for a host of other factors researchers can now pinpoint from the data which elements are the most dangerous.

Scientists had hoped they would find the secret X Factor in meat that's got the talent  to kill us early so they could neutralise it, genetically engineer it out of cloned pigs and carry on feeding people cheap meat without killing off their customer base. The meat industry have had various brainwaves, such as infusing beef with rare berries and smearing meat with mashed up maggots but all ideas so far have proved either too expensive or too yucky for US consumers.

In the study reported in Time Magazine it showed vegetarians reduced risk of early death by 12% and with vegans the stats were even better. As Colin T Campbell's research has shown for many years cheese is almost as dangerous as meat. His studies detailed in The China Study suggest cheese and dairy is like fertiliser for cancer cells.