Changing our eating habits could make a big difference to climate change, according to a vegan organisation.

Loving Hut is a vegan organisation that uses products such as soy protein to replace meat. Its founders believe that a simple way to reduce climate change is to change your diet.


The idea began at COP15/CMP5 in Copenhagen, when a group of vegans got together to promote their views. Two years ago Loving Hut was born and the vegan restaurant chain now has more than 200 outlets in more than 30 countries.
Brenda Wang, the executive director of Loving Hut USA, said that attitudes towards vegan food were changing. She said: “If you think that in two years we have been able to open more than 200 restaurants in more than 30 countries, then I think the world is ready. Every COP we go to the first question people ask is, ‘What does food have to do with climate change?’ and then when we talk to them about it, the second question they ask is ‘Why did it take so long for this idea to get here?’ ”
At 5.30pm on Wednesday Gerard Wedderburn-Bisshop, the executive director of the World Preservation Foundation, will give a talk at Qatar Sustainability Expo, at Doha Exhibition Centre, about how veganism can help tackle climate change.
He said there are two parts to the solution. The first is that reducing short-lived climate pollutants - such as methane, black carbon and tropospheric ozone, which are caused by grassland fires and livestock - can slow global warming. The second, long-term fix, is to stop eating meat and return the world’s grazing pastures to forests, savannah and native grasslands.
He said: “People are desperate for solutions. It is a radical, but a natural solution. A lot of people are becoming vegans but most people are very resistant to this idea. However the tide is turning and I believe that within a decade we will see desperate measures being looked at. I believe that humans are slow but they are not stupid, so they will look at this even though it seems a way out idea now. It is safe, it is effective, it is low cost. It means changing what we eat but if changing what we eat can save the world we will do it.”

CHEESE! - Now Your Friends Can Be Vegan Too !

Now Your Friends Can Be Vegan Too - CHEESE!

For health and nutrition advice and dairy intolerance / allergies in London please see Nutritionist London
Posted by Vegan Chef at 3:04 PM No comments:

This strudel uses chicken style strips to give a turkey- ish essence to this chestnut and cranberry strudel. See also Christmas recipes for a vegan seafood Cocktail and savoury vegan mince pies

Thanks to Veggievision and Foods for Life
Posted by Vegan Chef at 2:00 PM No comments:

The Future's Bright The Future is Vegan 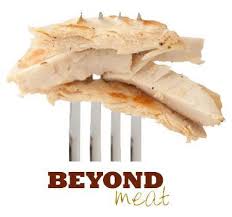 
This is no ordinary Meat Free analogue meat alternative. This is Twitter - rific vegan meat. You really know something is about to change when the big boys and their investment houses get involved.

At last seems we have hit critical mass, the hundreth monkey syndrome - vegan beyond meat that actually tastes like meat.

My one reservation about Beyond Meat is that they didn't add some vitamin B12. Then I'm sure they could have legally claimed Beyond Meat is better than meat. It seems an obvious thing to miss, but possibly easily rectified.

With the big muscle of the social media champions Twitter behind it,  the British retail industry has a big shake up on their shelves ahead of them. Sainsbury have a few Linda Mccartney like sausages, Asda have some vegan chicken pieces, Tesco have some new Free From dairy products but not much for vegans. Generally UK supermarkets are behind the US on the vegan front where A listers such as Bill Clinton, Oprah and blockbuster film producer James Cameron are all getting their teeth into good vegan food.

This side of the Atlantic the supermarket shelves are dominated mainly by Quorn, which contains egg, is dry and bland, expensive, sometimes also has dairy in it, is lower in protein and lacks essential fats.

Cauldron, a sister company often gets a look in but despite being tofu based still resorts to egg to hold it together.

Linda McCartney once the nation's favourite have been gradually squeezed out by Quorn but only have themselves to blame as they too unecessarily resort to cheese, egg and dairy in most products.They are still shaking off the scandal of the hydrogenated fat that British TV backstabbed them with.

Beyond Meat is not just egg and dairy free it's even wheat and gluten free featuring an inspired mix of  pea and soy protein with amaranth ( a legendary Mexican pseudo grain) and carrots!

If it tastes as good as just about everyone is saying it does then it's not just Quorn, Cauldron, and Linda McCartney foods that should be quaking in their has been vegetarian Quakers' boots - it's the bulk of the British Meat Industry

They'll probably still be a market for free range organic specialist meats but cheap factory farmed meat will surely be obsolete, what would be the point? It's a total no brainer. Why would you risk your health and survival of the planet over such a denatured, bacteria laced product ?

Why would you eat meat and risk heart disease, diabetes, altzhiemers, certain cancers and a host of other diseases in addition to helping to cause environmental catastrophe when you can tuck into something as allegedly delicious as Beyond Meat? It's beyond me !

Lone Star Tick's Bite Could Make You An Unwilling Vegetarian

This bug could be Viva! and PeTA's celebrity of the year in 2013 after it's been discovered that one bite from the insect can make you allergic to meat! The TicK could rival PeTA's famous vegetarian naked lady protests and prove better at converting young teens to vegetarianism than millions of pounds worth of Vegan Society Videos and pamphlets.

The rumours that The World Health Organisation are cotemplating recruiting the bug to help reduce rates of obesity, heart disease and diabetes are so far unconfirmed ;-)

This vegan Dinosaur with up teen horns is not to be messed with. A seriously hardcore vegetarian that makes a rhinoceros look like a wet pussy cat.

His pure naked strength proves you don't have to eat hairy meat to have big muscles and be a powerful beast.

This is one big mother who is not going to lay down and say eat me when a T Rex turns up, who's sure to think that's too big a mouthful to get my teeth around.


"Xenoceratops provides new information on the early evolution of ceratopsids, the group of large-bodied horned dinosaurs that includes Triceratops," said  Dr. David Evans of the Royal Ontario Museum and University of Toronto. "The early fossil record of ceratopsids remains scant, and this discovery highlights just how much more there is to learn about the origin of this diverse group."