Demand has dramatically increased for vegetarian and vegan wines recently as drinkers become more aware of the dodgy ingredients that some wine producers use to speed the clarification process of the wine such as gelatine.

The Co-op have led the market in this field as one of the first retailers to put on the label ALL the ingedients.

Other distributers include Smithfield wines, Vinceremos and Vintage roots aswell as award winning Organic British wine makers such as Seedlescombe wines in East Sussex near Hastings
Posted by Vegan Chef at 12:44 PM No comments: 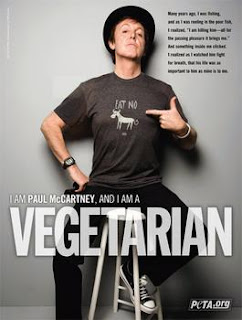 Sir Paul McCartney has criticised Gordon Ramsay - calling the TV chef 'stupid'.
Ramsay, 41, has angered the ex-Beatle, 66, with his outspoken comments against vegetarians.The foul-mouthed chef has annoyed the music legend by saying he could not tolerate it if one of his three daughters came home with a vegetarian boyfriend."

Ironically Gordon Ramsay shares Sir Paul McCartney's dim view of the chef. Ramsay says "you'd have to be F****** stupid to go out with a chef" - there's 2 things Ramsay's daughters are forbidden to do - go vegetarian and date a chef!

There's only one group of people Gordon Ramsay dislikes more than vegetarians and that's Traffic Wardens. Ramsay once said he'd rather go and work for the vegan society than be a traffic warden.

Last month Paul McCartney encouraged everyone to participate in meat out mondays we are presuming Gordon Ramsay isn't participating!
Posted by Vegan Chef at 7:35 PM 2 comments: 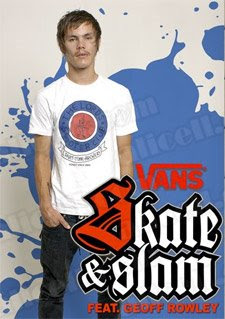 And no he's not hanging on Natalie Portman's coat tails - he's been inspiring vegan shoes for vans for many years now.
Posted by Vegan Chef at 9:36 PM No comments: 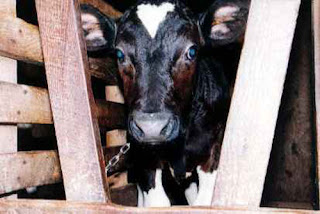 Last year around 260,000 young, male dairy calves were condemned as "waste products" in the UK, as they don't produce milk and are rarely used for beef due to their low muscle tone. These animals are either shot at birth or exported to the Continent for veal.

It's astonishing that the RSPCA and CIWF suggest the solution is to eat more British Veal!(Once described as the worst 4 letter word in the English language by comedy legend Spike Milligan)

Surely the logical answer is to eat less dairy and go vegan!

If you are a member of The Vegetarian Society please urge them to spill the beans on milk production and tighten up their policy on dairy cow welfare at their AGM! There is mounting scientific evidence that a 30 year old natural Vitamin C cancer treatment by Nobel Prize winning Linus Pauling is more effective than chemotherapy and without the side effects.

The chief researcher of an American trial, Dr Mark Levine of the American National Institutes of Health, has been investigating vitamin C's cancer killing abilities for several years. He's already shown that it's effective in a test tube and two years ago, he published a report on three patients who were treated for serious and advanced cancers and survived far longer that would normally be expected.

'We now know that the vitamin C gets into tumours in large amounts and that it kills them by causing a build up of hydrogen peroxide. In fact, vitamin C is hardly a new anti-cancer treatment. It was famously used by double Nobel Prize winner Linus Pauling more than 30 years ago, who found that terminal cancer patients treated with vitamin C lived much longer. However, when his trials were repeated at the prestigious Mayo clinic in America, the researchers found no benefit. Proponents of vitamin C point out the clinic only used oral vitamin C which can work differently.


'This is just the sort of thing that public money should be spent on,' says Dr George Lewith, of the University of Southampton, who assesses complementary and alternative medicines for the National Cancer Research Institute. 'I would be strongly in favour of running a proper clinical trial of IVC as soon as possible.'
Posted by Vegan Chef at 4:37 PM No comments: Gyyneth Paltrow is doing nothing to stop stories of Marriage troubles in fact she is actively fuelling rumours that her marriage with Vegan frontman of Coldplay Chris Martin is on the rocks.

Her latest trick is to actively provoke scorn from her celebrity vegetarian and vegan friends such as Moby and Stella McCartney and rattle the cage of a host of animal welfare organisations such as respect, PetA, ViVA!, Animal Aid who are spitting feathers, tearing hair out amidst a flurry of fur flying around in disbelief that she has committed the ultimate veggie sin - modelling fur - yes fur! Vegetarians begrudgingly accept other people unecessarily killing to eat as despite the evidence some people still consider that meat is an essential part of a healthy diet and prevokes the most basic of survival instincts.

Fur on the other hand (or on the other paw) is considered taboo. Thats killing and torture purely for vanity, for fashion, for kicks, for money - for a sick kind of fun. Animals are often killed by inserting an electrode up their bumhole and killing the animal by electrocution so as not to damage the fur. It takes a special kind of sadist to think up an execution like that.

There are a number of celebrity anti fur adverts. Sophie Ellis Bextor's - "here's the rest of your fur coat is probably one of the most gruesome since it takes up[ to 40 dumb animals to make a fur coat but just one to wear it" with a model on a catwalk trailing blood behind her.

We wonder what on earth Gwyneth Paltrow was thinking. She must have known what would happen - it's rumoured she's desperate for publicity - but this is A list dumbicity.
Posted by Vegan Chef at 10:58 PM No comments:

So for World Vegan Day 2008 lets start in the middle of the country and gradually spiral outwards shall we?

We hope this vegan cookbook will finally be finished by then too! 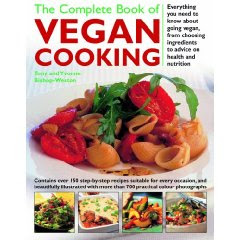