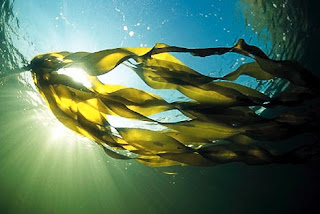 BBC TV and radio and national newspapers are full of news of new research about seaweed that claims it proves seaweed helps with weight loss.

The trouble is that the extension of the research is to recommend adding seaweed to crap food so it's then OK to continue to eat crap food like biscuits, white bread and white pasta.

Clearly they need a good nutritionist to explain the science behind 'healthy diet' - oh here's one...

London Nutritionist Yvonne Bishop-Weston says "Yes seaweed offers some important nutrients (such as iodine) to our nutrient deficient diets but if you want to lose weight and be healthier you have to start eating food for your brain not food for your bum!"

Buy Seaweed and Algae
Posted by Vegan Chef at 10:56 AM No comments:

Greepeace target Nestle in CROYDON on palm oil and rainforest... on Twitpic

Greepeace target Nestle in CROYDON on palm oil and rainforest... on Twitpic

Greenpeace targetted Nestle offices all over the world today to highlight the problems of rainforest devastation in the name of Palm oil production.

Solution - our friends at LUSH cosmetics could find no truly sustainable industrial sources of Palm Oil so they invented their own solid saturated fat alternative from a mixture of sustainable vegetable oils.

Numbers will be swelled by the Heather Mills media machine kicking in with a surprise announcement lined up.

The show will be fetured in The Guardian on Saturday and ITV and BBC cameras are expected.

Fun for all the family and a lot more than just buckets and trays of vegan puddings , cakes and desserts.
Posted by Vegan Chef at 3:54 PM No comments:

Over half a million Doctors and Physicians have now joined President Barack Obama's call to change the US healthcare system that is being strangled by the insurance companies.

Vegans should be protected from discrimination, says equality watchdog - Telegraph

The Telegraph Reports;
Miss Harman’s proposed Equality Bill would not change the law on religious beliefs, but the Commission is drafting the code at the same time in order to help employers interpret existing legislation.

The draft code, currently under consultation, singles out vegans, who do not eat animal products or wear leather, as meriting protection from religious discrimination.
It says: “A person who is a vegan chooses not to use or consume animal products of any kind. That person eschews the exploitation of animals for food, clothing, accessories or any other purpose and does so out of an ethical commitment to animal welfare.”The code says the current definition of “belief” also included “a lack of belief”, giving protection to atheists.


Tony says;
If anything vegans have even more conviction, dedication and focus on their philosophy than many other followers of beliefs. Vegans would suffer the same if not more emotional distress as any member of a religious group if they were punished for their beliefs. Veganism is more altruistic too there's no dangling carrot of heaven or vahalla or threat of hell if you don't adhere.

If you're Jewish and eat prawn and bacon sandwiches and work on the Sabbath you're still Jewish. If you are Catholic and wear condoms, commit adultery, eat bacon on Fridays, kill and maim people and work on a Sabbath you are still a Catholic.

You can't eat bacon sandwiches any day of the week and still be a vegan! (unless it's Redwood's cheatin bacon)


It's quite right that human rights and anti discrimination law should protect a group who are dedicated to selflessly trying to protect people, animals and the environment.
Posted by Vegan Chef at 7:34 AM No comments: