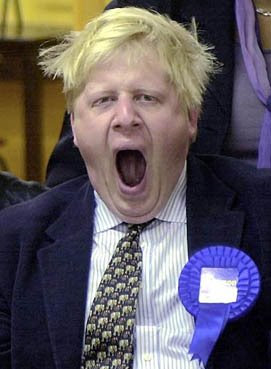 Mayor of London Boris Johnson Vs Ghent, The UN, Sir Paul McCartney, Health, The Environment, The Vegetarian Society, and The Bristol Vegan Fayre

Cook and author of a new cookbook Tony Bishop-Weston , 48, says EU elections for MEPs are a good opportunity to send a wake-up call to Boris Johnson and his Tory pals. He says “Boris should be following UN advice and leading the way. Instead he’s promised to make matters worse. In the EU elections we can vote with our hearts for the good of the planet rather than the voting mentality that led to the election of Boris in the first place. ”

With the wealth of evidence accumulating to verify that eating less meat is better for our health, better for our wealth, better to fight world poverty and better for the environment even staunch meat eaters agree that it would be better to eat less even if they are too selfish to consider this a full time personal option. Boris Johnson the Mayor of London has promised to eat even more meat rather than less in response to the suggestion by the United Nations scientists, Sir Paul McCartney, The Vegetarian Society, health professionals, environmental and Green campaigners, the city of Ghent and organisers of The Bristol Vegan Fayre that we eat less meat and more fruit and vegetables in order to save the planet.

Bishop-Weston will be demonstrating recipes from his new book, The Complete Book of Vegan Cooking at The Bristol Vegan Fayre on the 30th and 31st May on Bristol’s waterfront and says “The aim of The Bristol Vegan Festival is to prove how easy, enjoyable, healthy and fun it is to be kinder to people and the planet. I wonder if Boris could even tell the difference between a meat sausage and some of the better brands of vegetarian sausage, it is prejudice for the sake of ignorance” 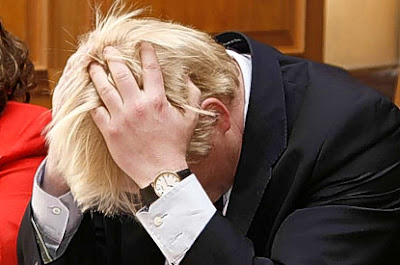 Boris Johnson wrote in the Telegraph “if they seriously believe that I am going to give up eating meat - in the hope of reducing the temperature of the planet - then they must be totally barmy. I am not going to have one meat-free day per week. No, I am not going to become a gradual vegetarian.”

In fact he has found the whole suggestion of meat reduction to save the planet so irritating that he has actually suggested we eat MORE meat this summer in response. He suggests vast barbeques every weekend that include carnivorous festivals of chops and sausages and burgers and chitterlings and chine and offal, - “the fat will run down our chins, and the dripping will blaze on the charcoal, and the smoky vapours will rise to the heavens” predicted Boris

“I can think of no logical explanation for this kind of thinking in a politician” said Bishop-Weston. It dismisses the facts, the UN report Livestock’s Long Shadow, the rate at which Brazil’s rain forest is being destroyed after being forced to grow GM soya to feed the world’s cattle, the Oxford EPIC research proving that those who eat less meat, vegetarians and vegans are far healthier than the national average and the world’s poor, starving, predominantly because the modern world values beef more than human life.”


At a sausage tasting event held at Tibits Restaurant in London judges rated Redwood's cheatin sausage as the overall winner on taste with Cauldron and Frys from Beanies close behind on points.

More Vegetarian/ Vegan Sausage Tasting News
Posted by Vegan Chef at 1:54 AM No comments: Links to this post

HOPE not hate - Truth about the BNP 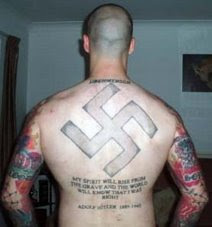 I've been to museums that show the history and facts about the Holocaust, I've met people who survived the camps and met many more people whose relatives and friends did not survive.

See also Kick it Out
Posted by Vegan Chef at 11:49 PM No comments: Links to this post 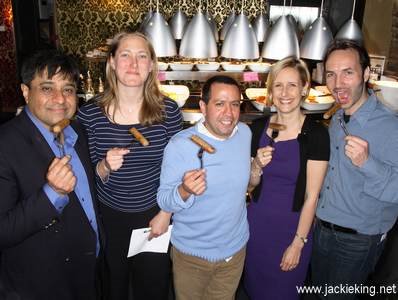 Naked Vegan - Are you getting it 5 times a day? 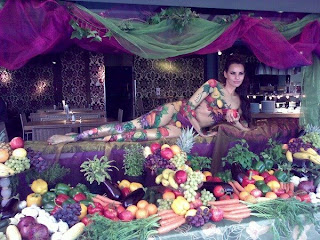 Are you getting it 5 times a day? tibits restaurant kicked off National Vegetarian Week with a BANG this morning as body painters spent 4 hours painting naked vegetarian model Juliet into '5 a day Eve'. (and now a little bit for the Sun/Daily Star readers)Aparently only 15% of us get it 5 times a day - asked if tibit's naked '5 a day Eve' had 'adam, the hot potato said "oh yes! I'm a very committed vegetarian- I take my 5 a day very seriously" As naked Eve bit on Adam's apple the were no worries of the May winds making her shiver.The gathered paparazzi all agreed - "this fruit is HOT!"

On thursday morning between 8-10am tibits are inviting journalists to decide if the McCartney clan are still the top hot dogs of the vegetarian world at a blind tasting of the UK's top veggie sausages and showcase of some of the UK's best vegetarian products. To be added to guest list please visit Tibits NVW Breakfast event

Vegetarian - 1 day at a Time

At last someone taking the UN, Paul McCartney and George Monbiot seriously and doing something about it. The Sausage loving politicians of Ghent have fearlessly suceeded where Camden council tried but failed. They made the whole town go vegetarian once a week.

A good start.Only another 313 days to go!!!
Posted by Vegan Chef at 9:41 PM No comments: Links to this post

George Monbiot: Credit crunch? The real crisis is global hunger. And if you care, eat less meat - The Guardian

Meat eater, George Monbiot eloquently highlights why the most dynamic gesture we can make to help stop people starving to death, stop the irresponsible destruction of our planet and save the teetering world economy is to eat more vegan food.

He also draws attention to the fact that many vegans are their own worst enemy. By failing to take care of their health and bodies vegans, allowing their skin to turn to a "fascinating pearl grey" are providing excuses to even our potentially staunchest allies.

The trouble is there are some vegans out there who revel in veganism's fringe niche-ness spending their lives discouraging people rather than encouraging people to adopt our more environmentally friendly, ethical and potentially healthier lifestyle.

It's now more important than ever that for the future of mankind that all the healthy vegans who easily avoid deficiencies of essential fats and Vitamin B12 and the associated emotional problems join together to double their efforts to prove how enjoyable and easily attainable vegan diet really is with just a few basic shopping tricks.
Posted by Vegan Chef at 4:13 PM 1 comment: Links to this post

Credit Crunch offer for National Vegetarian Week by Tibits, a Free Meal
Posted by Vegan Chef at 2:25 AM No comments: Links to this post

Tibits will be leading the celebrations for National Vegetarian Week in the City this year with a number of events.

MONDAY Tibits does 5 a Day 5 portions of Veg , more than 5 Times a Week is the message from Tibits this year and what a delicious way to get your 5 a day.

WEDNESDAY It's A Lush Vegetarian Life Lush Covent Garden,10 The Piazza, Covent Garden, London WC2E 8RB May 20: Free fresh face mask workshop between 6 and 8pm. This promises to be a great, hands-on experience and an opportunity to try some fresh Lush products. There will also be complimentary refreshments. There are a limited number of places available, so if you would like to go please call 0207 240 4570 to book your place.

THURSDAY - Tibits - Traditional Big Breakfast Best Of British Competition - VIP's and Journalists are invited to vote on the best of vegetarianism and decide the top 10 of vegetarian excellence. The rest of us can nominate our favourites online in the Tibits guestbook
Swiss style restaurant Tibits will taste test challenge Stella McCartney to see if she still thinks her mother's pioneering vegetarian sausages are still the best tasting British Vegetarian Sausages. Tibits Book Tibits 5 a day Tibits Breakfast

SATURDAY & SUNDAY Hampton Court Palace East Molesey, Surrey, KT8 9AU. May 23, 24, 25: Foodies at Hampton Court. The event, which is in it’s third year, celebrates food and drink with chefs demonstrations, food and drink masterclasses and a market of specialty producers. Cordon Vert Tutor, Chico Francesco will be demonstrating on each day, a selection of delightful dishes from the Cordon Vert’s new ‘Inspired by Linda McCartney workshop’.

The finale of National Vegetarian Week 2009 will as always be The Bristol Vegan Fayre the world's biggest vegan festival on the 30th and 31st May 2009. Great Bands, Ethical Shopping, family Entertainment and as always so much more!
Posted by Vegan Chef at 11:37 PM No comments: Links to this post

Yipee, at last, finally vegetarian sweets! - well actually vegetarians/vegans have had sweets for years and companies such as Just Wholefoods have madeVegeBears and even won awards for their efforts.

The trouble is they are usually only sold in health food stores as Haribo have a strangle-hold on everywhere else.

So! great news that Haribo have veganised their sweets and we can now buy vegetarian confectionery EVERYWHERE.

But do we really want vegetarian kids to eat more sweets? It was a great get out clause for parents - "oh no, sorry darling you can't eat that crap because it's got little piggies testicles, toes and ears in it and probably a little bit of it's anus too"

Now they've taken out the nasty stuff what do we do? We can't LIE, it's not PC to say "No darling, my little vegan pumpkin, you can't eat that crap because you'll end up fat and ugly like the poor kids on the bus", we could I guess threaten them with the dentist but we've spent years nuturing a good relationship with the dentist and avoiding passing on hereditry irrational fear. What the **** do we do? Not sure "have a satsuma instead" is going to cut it. Do we be economical with the truth and keep the news from them? It's only going to take one naive well meaning mum to say "don't worry little odd child, they've changed the recipe you don't have to be an alien any more you can be like all the other spotty, grossly overweight and snotty children"

Then we'd be caught out and our children would never believe a word we said, ever again - oooh - like normal kids then.

It's taken Neville Finlay 3 years to get these Halal sweets to mass market I guess we should be greatful . Personally I wish he'd stuck to vegan Caviar!
Posted by Vegan Chef at 10:31 PM 7 comments: Links to this post 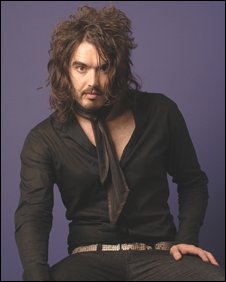 Seems either the crew cut is back in or the researchers surveyed members of Saga and 'help the aged'.