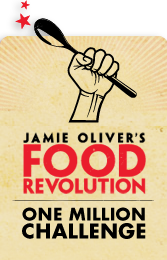 Join The Food Revolution – The Umpires Strike Back
It seems the world is revolting and finally waking up to the food industry con trick of selling us half food rather than whole food. Celebrity chefs are smelling blood and opting for vegetables. They may look more like cricket umpires than chefs but the are changing the way we think about food.
Jamie Oliver
I used to think he was a fat lipped twonk, perhaps there was an element of resentment that he'd stolen my line about the naked chef .(most of theScottish newspapers had featured me naked with a wooden spoon at some point). Love him or hate him celebrity chef, looking more like a cricket umpire who's lost his hat than a chef, Jamie Oliver is changing the world and the way we live and eat. His food revolution to transform kids food at school has gained major celebrity support and is speeding towards a million supporters from all over the world. He's fired a broadside shot against the sugar industry and is waiting for sugar ninjas crashing through his bedroom window one night.
Hugh Fearnley-Whittingstall
Another oddball who looks like he'd be more at home on a village green cricket pitch with a sumo-ish layer of jumpers around his waist and a straw hat is tank top wearing River Cottage celebrity chef Hugh Fearnley-Whittingstall. Not one to be out done and hot on the heels of his modicum of success with his fish fight he has brought out a cook book for vegetables - 'Veg Every Day!' Yep that's right Hugh – eight portions every day please! He's even started to mutter the veggie-mantra that eating more vegetables is better for health and better for the planet.
Yotam Ottolenghi
Yotam built up huge admiration whilst conjuring up vegetarian recipes for The Guardian, his book, The New Vegetarian is exquiste despite dissappointingly being splattered with eggs and cheese at every opportunity. Nonetheless he has brought vegetables to new tables in new households in a wholly delicious way and opened peoples eyes to the potential of plants. Quinoa fennel Salad
Meanwhile in the USA apart from Bill Clinton singing the praises of his Plantarian style vegan diet every few months and a plethora of pro veg Doctors joining the twittering wifi generation, things do seem to finally moving in the right direction.
Whatever next ? The Hairy Bikers cooking up Vegan Chocolate cake??
At the risk of hyperbole there does seem to be about a hundred different movies at the moment, such as Planeat, Forks before Knives, Meat Matters, A Delicate Balance, Sea The Truth et al that all sing the praises of a Plant focussed diet.
Everyone seems to be jumping aboard the Plantastic Plantwagon, but then didn't I warn you about that in January?
So what can you do? Foods for life have launched One World Day (http://www.1worldday.org ) as a catalyst to help you to encourage new people to explore healthier, more sustainable delicious food on November 1st. What we need is as many new people as possible to take their first steps on a plantarian path towards optimum health and a more stable, sustainable future for our planet
We've not long left now, so please if possible talk to restaurants or hotels about putting on a special One World Day menu and encouraging their customers to bring their friends in to try it – A One World Day Disney Offer – If they 'Disney like it' then then they don't pay. ?
We also need lots of Double One Diet Dare Product offers for 1:11:11 - 11:11:11