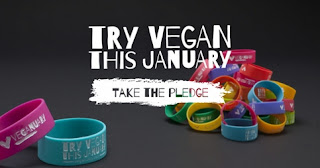 We doubt the people behind Veganuary, Matthew Glover and Jane Land, the 'start the year vegan' , go vegan, be vegan , stay vegan campaign,  could have dreamt of a better beginning to 2016.

There has been unprecedented publicity for the vegan campaign that rides on a crest of a wave of New Years resolutions and fanatical January detoxing.

Veganism has always been the big white elephant in the room it offers so many solutions for those wanting to live more ethical lives and be kinder to health, the environment and of course animals, fellow earthlings. Something seems to have clicked this year though and it seems to have captured everyone's imagination and sense of reason and logic with a resounding 'Why not?'

Predictions so far, are, that at least 50,000 people will go vegan this January Veganuary. That's more than the total of all the visitors to the 100% vegan VegfestUK festivals in  Brighton, Bristol, London and Glasgow in 2015 which averaged about 10,000 people per show (London Vegfest at Olympia saw 12,000 through the doors)

Here's a round up of just some of the amazing Veganuary coverage so far.

In the Daily Mail

There's even a Veganuary Soundtrack as Hitthefloor.com have put together a collection of Vegan Veganuary Songs.

Google Trends now shows twice as much interest for vegan as vegetarian and not just in the UK but all over the planet. The features and PR for Veganuary have not been confined to the UK either. There have been Veganuary articles in The USA, Canada, India , Australia and New Zealand too. It seems the whole world is becoming more vegan friendly


Of course not all the PR has been favourable Harpers Bazaar managed to find a bizarre nutritionist to bizarrely agree to equate protein rich lentils with doughnuts, whilst Time Out magazine equally bizarrely equated Veganuary with eating vaginas....?